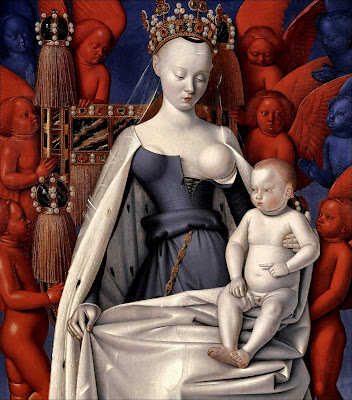 THE QUEEN OF HEAVEN
When you play kings and queens do you wear a crown, a robe and sit on a throne giving orders?
Would you shave your hairline to give the impression that you have a very high forehead?
Name the jewels in the crown!
Are the tassels of the throne made of real gold thread? Ermines have little dark tails and make up the fur lining of the white silk coronation robe. How does Fouquet manage to make the gauze veil look so transparent?
Does the Virgin look like a real person or did Fouquet invent that perfectly beautiful face?  She was real and her name was Agnes Sorel.   They say Agnes was the most beautiful woman in the world and she was a close friend of the King.
THE BABY
Jesus seems to be floating on the folds of the cape.  Instead of drinking milk, he is showing us something to the left.
THE DIPTYCH
The Madonna makes up the right half of a Diptych.  A diptych (from the Greek word for the number two) is an altar that is small enough for travel. It is made of two same size panels that are hinged together and that can be folded and shut. The left half represents Saint Steven with Etienne Chevalier, the Treasurer of the King. He had commissioned Fouquet to paint the diptych.  The diptych was taken apart in the 18th century.  (The other half is in the Gemäldegalerie Berlin, look for “the Melun Diptych” on the Internet!)
THE ANGELS
Cherubim guard the heavenly throne. We don’t see the bodies of the blue cherubs; only one little foot is peeking out on the right edge.  In medieval times blue was the symbol of heaven.
Seraphim (Hebrew: “the burning ones”) carry the throne.  They normally have six wings, two to fly and two to cover their eyes.  Spot an extra wing on the seraphim who is looking demandingly at us. Fouquet paints these angels in “burning” red, the color of love!
ART DETECTIVES
Can you spot the reflection of Fouquet’s studio window on the two balls of the throne?
Does the skin tone of the mother and child resemble white marble or real skin?
What are the three main colors in the picture?
Hint: the king’s coat of arms was made of red, white and blue!
FOUQUET
Fouquet worked for Charles VII and also illustrated beautiful books.  Joan of Arc had put Charles on the throne at the end of a war that lasted one hundred years.  Charles had a wife but his true love was Agnes.
Agnes had already died by the time Fouquet painted her, but her beauty was unforgettable.


Fouquet had traveled to Italy to see great art.  He also admired Jan van Eyck (see previous blog)who was a bit older.  His style of painting represents the transition between the late Gothic and Early Renaissance.
Posted by Puppa Nottebohm at 12:07 PM