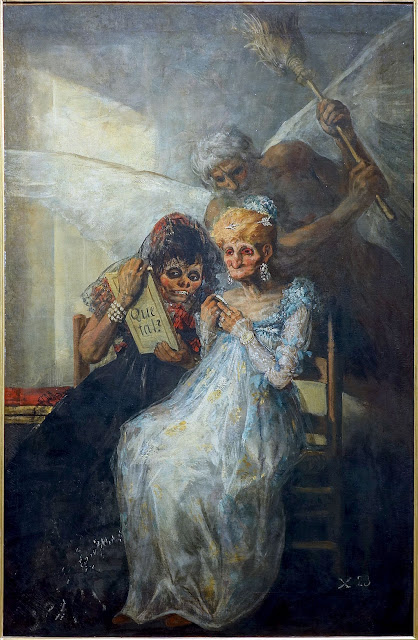 QUE TAL?
How are you?
Is that question for us? What do you feel when you look at this painting?
Are you scared or do you laugh?
Which old crone do you pick for Halloween?
THE MAID
The one dressed in black on the left is holding “Que tal?”(“how are you?” in Spanish) for her mistress.  Is the answer good or bad?  Is she showing her a book or a mirror?
Here is a list of what you need for her costume:
A black wig
A mantilla (a lace shawl worn over a high comb by Spanish women)
Lots of make-up
A pig’s snout
A set of fake teeth
THE QUEEN
Do you pick the rich one with the blond hair?
She is dressed like a queen, dripping in jewels.
Her dress is made of the finest white and gold muslin, tied with playful blue ribbons. Is that dress befitting a young girl or a toothless old bat? What is she holding in her gnarled hands?
Does she even have teeth?
FATHER TIME
Father Time, hovering behind, is about to sweep them up with his broom.  He has a deep frown line on his forehead.  What is he worried about?
MORAL OF THE STORY
Are they sitting in a palace or in a bare room?  Might it even be a church?
Do the chairs look comfortable?
Are these women vain?
Try and figure out the moral of the story!
Do these women have a problem growing old gracefully and is time on their side?
Is this a fantasy or reality?
OLD MASTER OR MODERN?
Is this a traditional, life size portrait of a mistress with her maid?
How did Goya paint it?  In other pictures I have mentioned impasto, thick paint, and glazes, pigment thinned with oil. Is this picture painted with impasto or glazes?
Both are true, Goya built up his paint with glazes.  Thinly applied glazes create the appearance of the dress being transparent for example.  He then daubed on the highlights with thicker impasto.
GOYA
Goya painted this picture when he was completely deaf, he had lost his hearing at the age of 47. He lived under the rule of the Spanish kings and of Napoleon.  Throughout his life the church had an iron grip on its people.  Goya recorded the horrors of war and the whims of people.  Nothing escaped his eagle eye and he hated superstitions.
Goya makes us laugh, cry and be terrified of witches.  He can be brutal and real; dream-like and nightmarish.

Goya was a radical artist and some would say a crazy, romantic genius.
Posted by Puppa Nottebohm at 9:29 AM 7 comments: