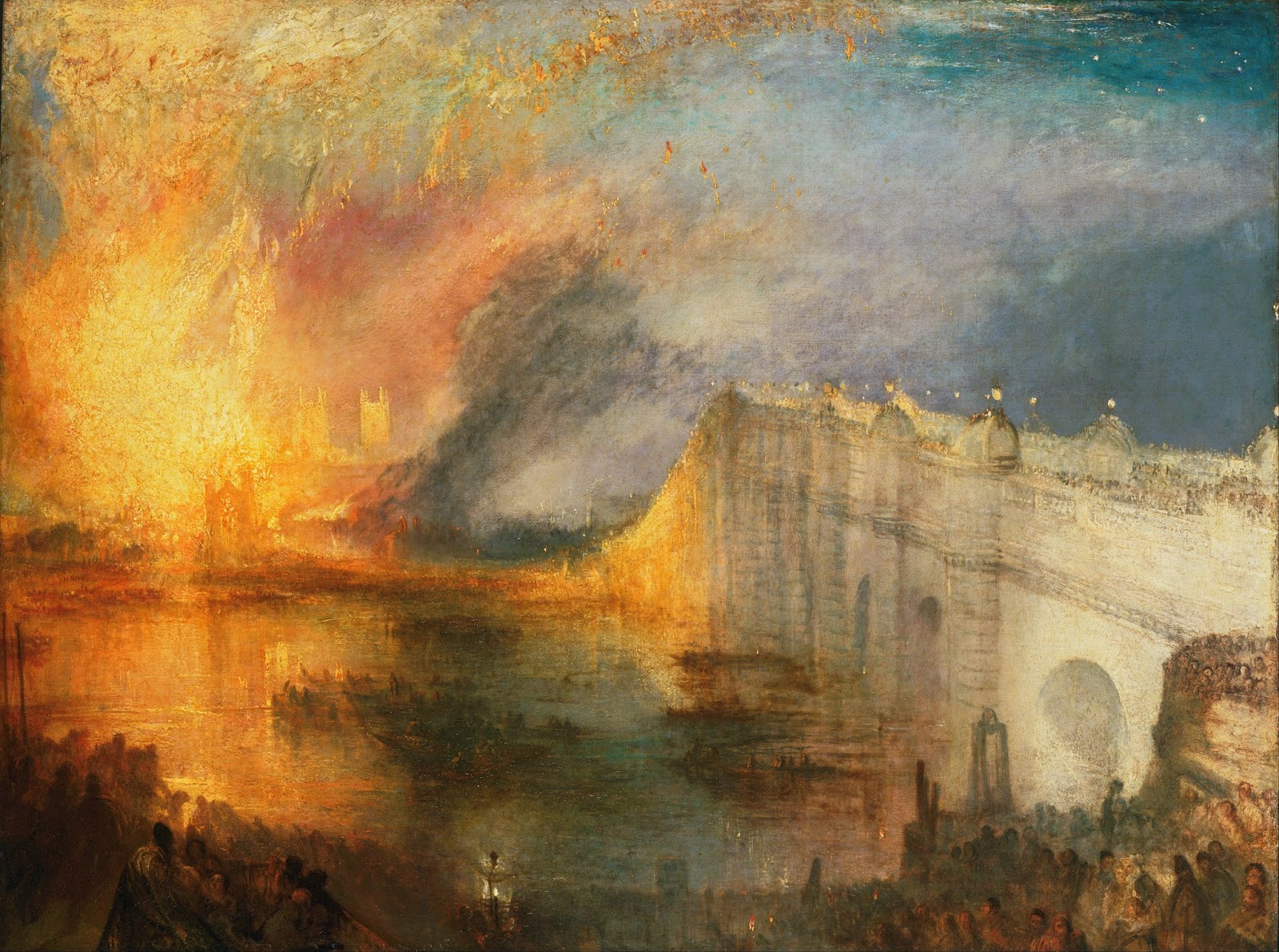 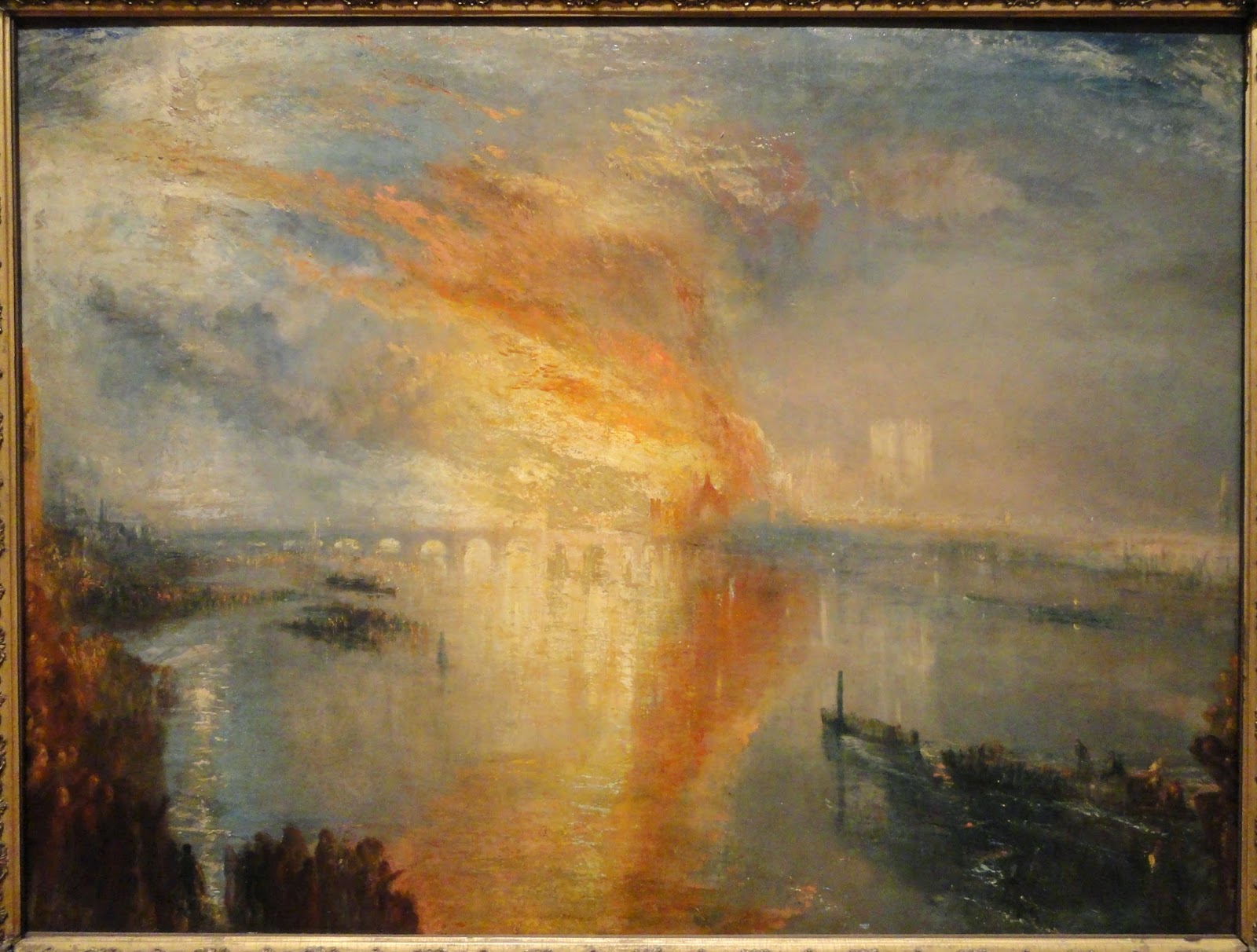 The Burning of the Houses of Lords and Commons
Painted 1835, oil on canvas, 92.5 x 123 cm
The Cleveland Museum of Art: Bequest of John L. Severance, 1842.647
A fire is raging.  In which picture do you feel the heat?
Where is the wind blowing in the two paintings?
Boiling hot sparks are flying everywhere.
Can you see the stars?
Find the reflection of the moon in the water.
All of London is watching.
Click and zoom:
http://www.google.com/culturalinstitute/asset-viewer/the-burning-of-the-houses-of-lords-and-commons-october-16-1834/UwEixmBDiZjk7A?hl=en

THE FIRE
At 6pm, on October 16, 1834 a gigantic ball of fire blew through the roof of the old Houses of Parliament in London.

That morning workmen had stuffed the basement furnace with too many sticks of wood.  The dirty flues overheated and exploded.  The fire raged for hours and the large medieval complex burned to the ground.  No one was left in the buildings and the blaze did not destroy Westminster Bridge.
JOSEPH MALLORD WILLIAM TURNER
Turner, the most famous artist in Britain, grabbed his sketchbook and raced to the banks of the River Thames. There he made sketches of the horrific spectacle.

The Conflagration from Burning of the Houses of Parliament (2) Sketchbook,
Tate, London, Accepted by the Nation as part of the Turner Bequest, 1856, CCLXXXIV
He had painted the four elements all his life and there he saw all four together in one terrifying moment. Later that night Turner took a boat down the river to get a different angle.
THE PICTURES
Back in his studio, Turner makes the two paintings from memory and with the help of his sketches.  He does not paint sharp contrasts.  Instead, he blends the colors. Turner wants you to feel the moment. His brush is loaded with thick, pasty paint, impasto.  In some areas he applies the paint with his palette knife (a metal tool used for mixing paint).
Please post your comments on
www.oldmastersrock.com
Thank you!
Posted by Puppa Nottebohm at 12:29 PM 4 comments:

The stage is set: someone is about to be robbed. It's a play of whodunit and the clues are in the eyes and the hands.  Follow them and you will figure out the hoax. 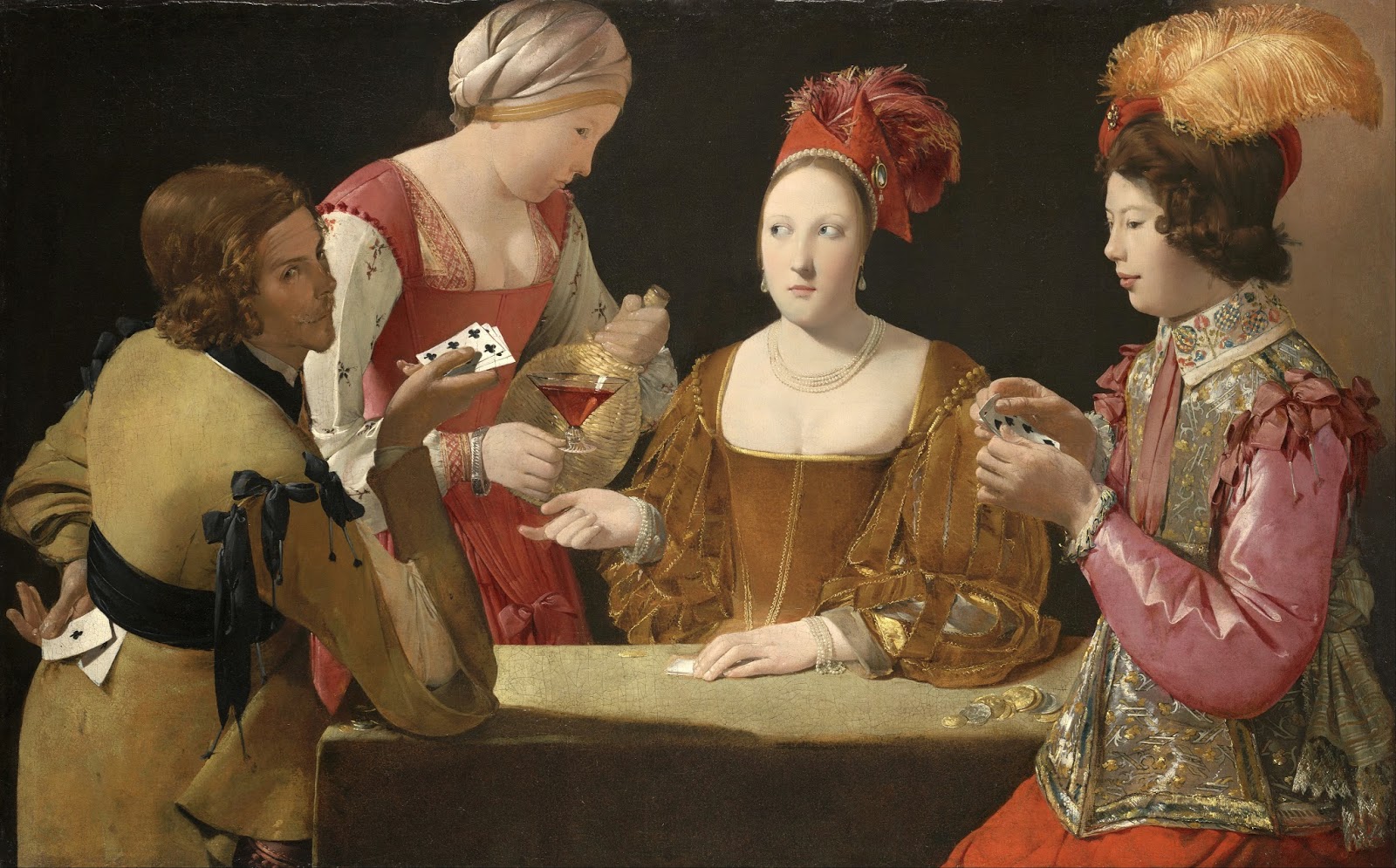 THE CHEAT WITH THE ACE OF CLUBS
Who is the cheat and who is being cheated? Take a close look by clicking on:
http://www.google.com/culturalinstitute/asset-viewer/the-cheat-with-the-ace-of-clubs/eAHsvdrPzFNGFQ?hl=en
Zoom in on the eyes; some people seem to have two focal points!
A young maid is serving wine to the woman wearing feathers and pearls.
Is she going to drink the wine or pass it along?
She is pointing to the man on the left with her index finger.  Is she sending a signal as a way to cheat?
What is the man on the left hiding behind his back?
Can you spot his coins?
There is one person who can look at everyone’s cards without being noticed. Who is it?
No one is speaking. By sending secret signals to each other, they are playing the hoax. 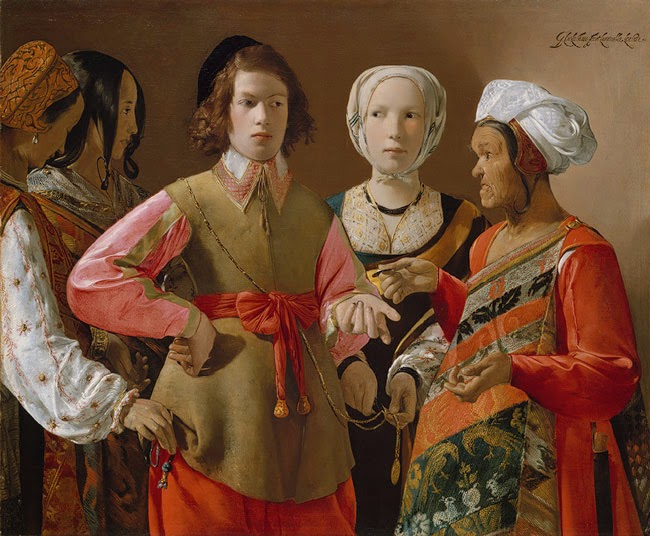 THE FORTUNE TELLER
Zoom in on the picture by clicking:
http://www.google.com/culturalinstitute/asset-viewer/the-fortune-teller/pwH9NtM23f0sQQ?hl=en
What is happening to the elegant young man who is having his fortune told by an old gypsy?
He is sandwiched between four women.
The pretty one is snipping something off with clippers. What is it?
Why are her eyes fixed on the man?
What are the women doing on the left?
The woman with dark hair in the back is ready to receive something in her hand.
Is the fool noticing anything or is he so eager to know his fortune that he is losing one?
Can you spot the AMOR (love) and FIDES (faith) inscription on the watch chain?

Georges de la Tour is sending us a coded message in both paintings-what do you think it is?

GEORGES DE LA TOUR
The artist lived in a small French town and painted such wonderful pictures that king Louis XIV made him his first painter. He paints in a style called Baroque, where artists often tell a dramatic story. The colors are rich and there are sharp contrasts (the edge between light and dark).  Georges de la Tour was forgotten for about 400 years after his death. Now people love his paintings again for the exciting stories he tells and the way he applies gorgeous, warm colors. The background in his paintings is always simple and plain. He builds up the paint with careful brushstrokes and applies glazes for luminosity and highlights at the end.  He admired Caravaggio, who painted The Cardsharps about 35 years earlier: 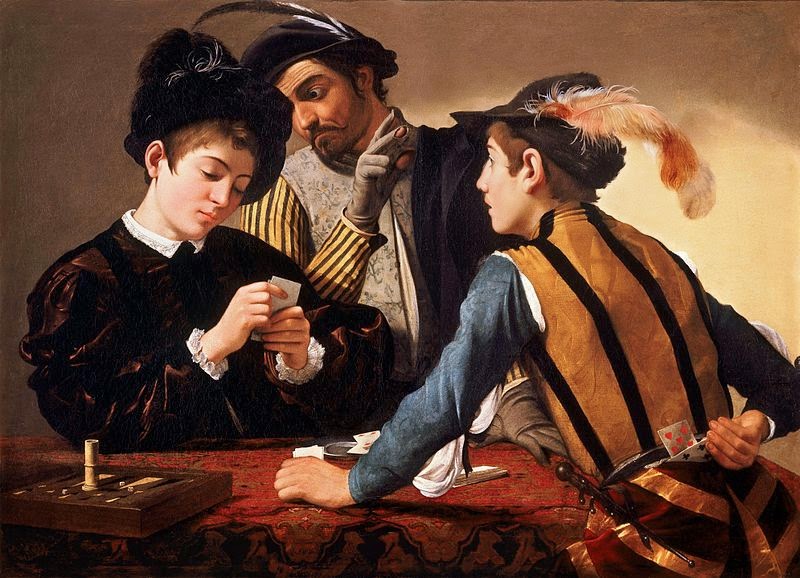 You can view previous issues and post your comments on www.oldmastersrock.com.  Please tell me how you feel about the paintings. Thank you! 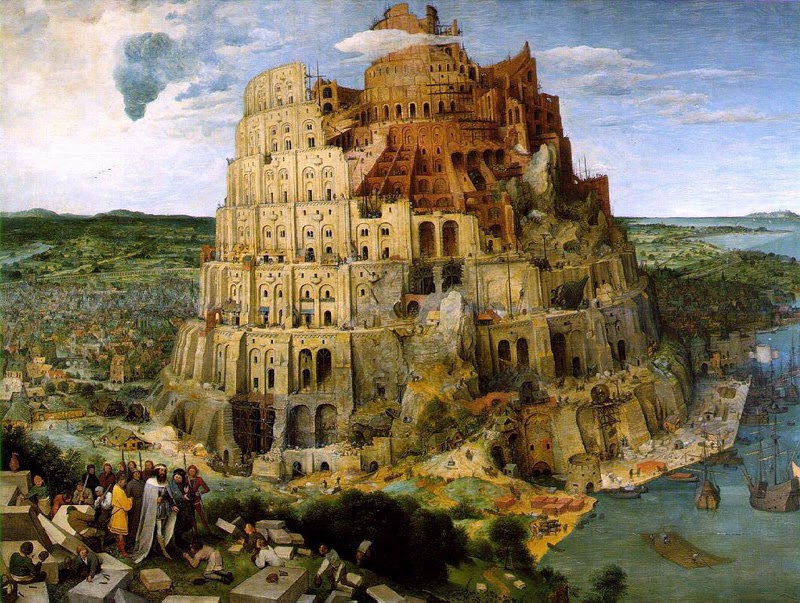 You are about to enter an amazing site.
Please click on the link below and start your journey:

THE JOURNEY
Everything seems calm at first. Look for a stone with the artist’s signature: BRUEGEL FE, MCCCCCCIII (1563).
Hint: Three nails and a round hammer rest on that stone, bottom edge.
Now step into the picture.
Make your way past the grumpy king who is scolding the workers.  Look for the path leading down to the landing on the right, where horses are waiting to carry red bricks. OOPS!  On the edge a guy is about to pee into the water. The harbor is bustling and ships are bringing the materials that cranes and pulleys are lifting.
You may want to follow the horse carts up the ramp and around the first three levels.  It seems the workers have moved in and are living there with their families. It would probably take them too long to go down to the bottom every day.  Fires are being built and kids are playing. Do you see a little face gazing through a window?

Explore the whole site close-up and you will discover amazing things.

ON TOP
You are now so high up that the birds and clouds are below you. Does the town look empty? Can you spot some people walking on a road by the river behind the city walls on the left? There you may also find a windmill and a church.  Can you find the sailboats near the island on the right?

BACK ON THE GROUND
Behind the king on the left, some workers are resting near a stream that leads to a pool of water. Are they sick of building?

ART DETECTIVES
Find a guy doing his business!! Is he pointing his rear toward the king on purpose? Is that a hidden message?
Do you think that the tower will hold up?

THE STORY
All the people spoke the same language. The king ordered them to build their city with a tower reaching for the heavens in the sky. Once they began to brag about their greatness, they were no longer able to understand each other. They babbled in many languages and scattered all over the earth.  They stopped building the Tower of Babel.

BRUEGEL
Before the artist painted the Tower he saw the Colosseum in Rome.  Did you see the liquid grey under-painting everywhere? The paint seems almost transparent.  He paints quickly and with thin glazes.  Below look at another Tower Bruegel painted. Compare the two!

If Bruegel lived today, would he build with LEGOs and play Minecraft?  Would you like to draw the Tower of Babel? 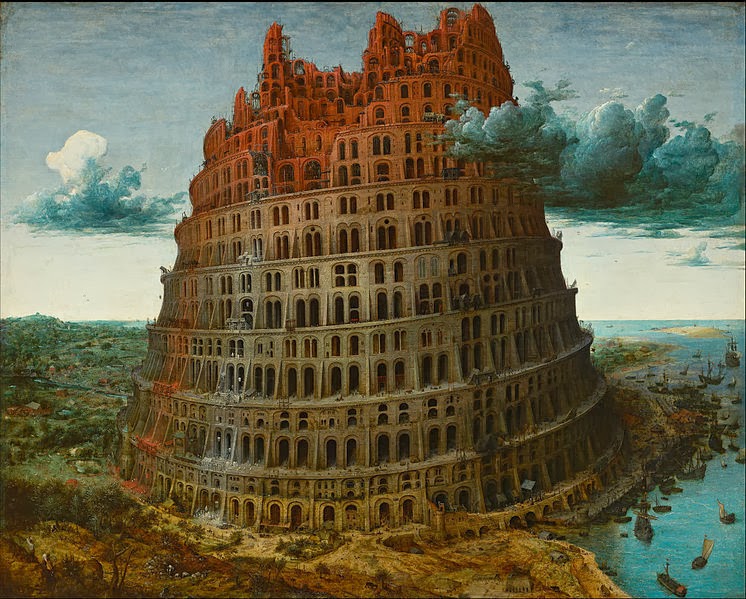 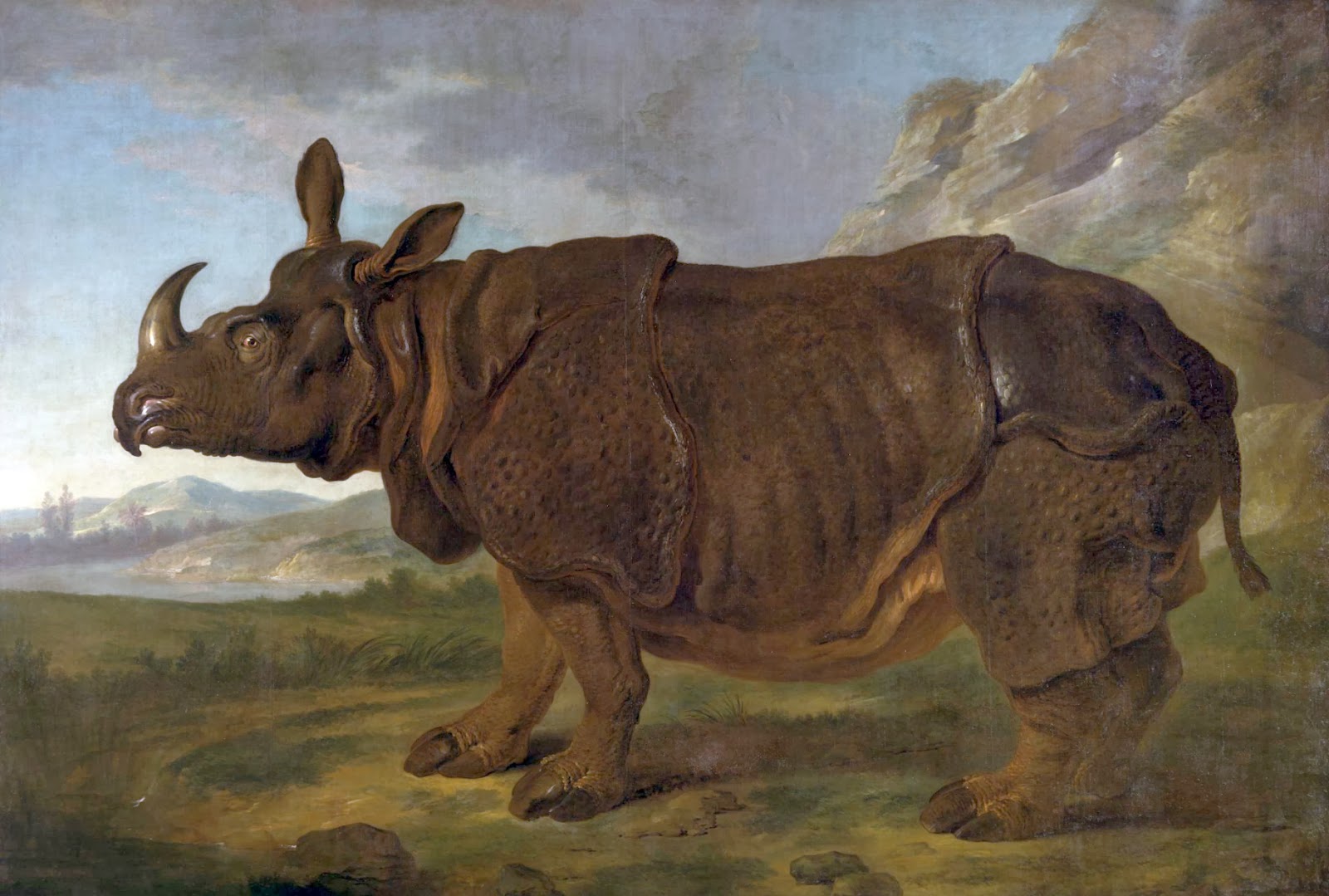 WHERE WAS CLARA’S PORTRAIT

Clara’s portrait was lost for 150 years.  Jean-Baptiste Oudry, a painter of animals, had met Clara at a fun-fair in Paris in 1749.  After he painted a life-size portrait of her (3,10 × 4,56 m), she became famous and some thought Clara was more captivating than the queen herself.
One hundred years later, the painting was rolled up and put it in the basement of a castle in Germany.  It was forgotten until 13 years ago, when two museum guys went down to the basement of that castle and discovered a large roll of fabric.  Was it a long lost treasure map or something else even more valuable?  When they unrolled it, they were surprised to discover that it was Clara’s portrait, a bit battered but still gorgeous, so they decided to send the painting to California to be repaired. 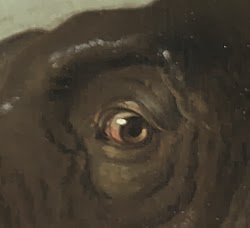 Those eyes, that nose, those lovely stubby legs!  She weighed 5,000 pounds, about the same as a large SUV.  What’s not to love?
Who is Clara?
Born in India in 1738, Clara the rhinoceros was one month old when her parents died and a man called Jan took her to his house and kept her as a pet.  She ate from porcelain plates at the table and was allowed everywhere in the house until she grew to be too big for his house.
Clara was sweet and not dangerous at all.  A Dutchman, Douwe Mout, took her on his ship to his native Holland. Clara was always hungry; she loved hay, oranges and beer. 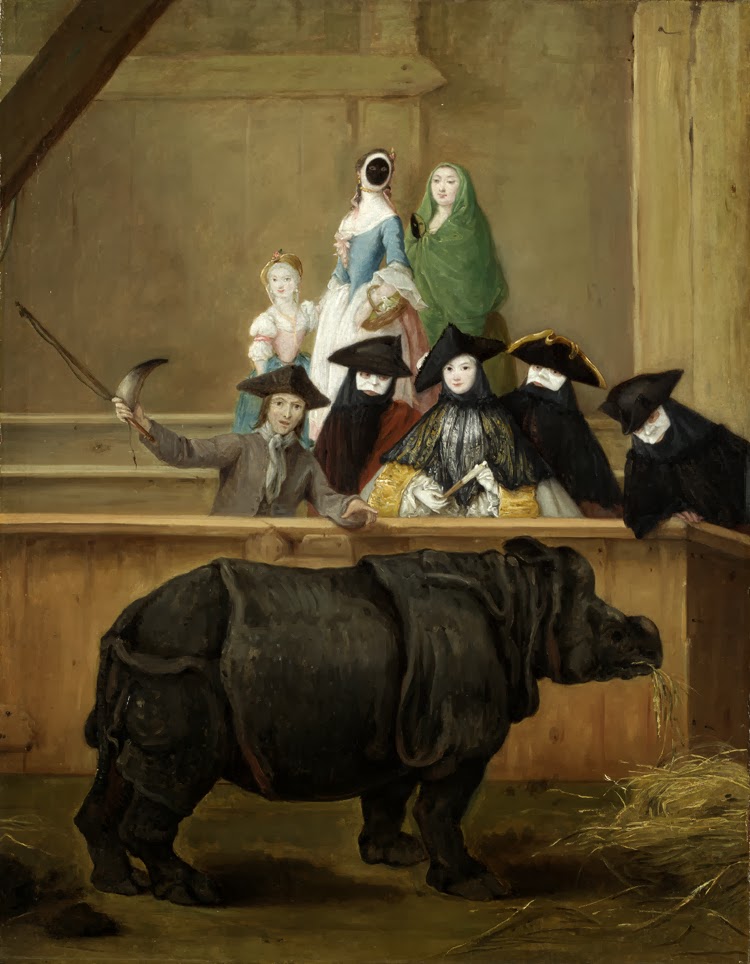 Very few people in Europe had seen a rhinoceros, so Douwe took her on a tour.  They made a porcelain Clara, all shiny and smooth. They made clocks, coins, prints and wrote poems and songs about her. Fashionable Parisian ladies went nuts: They wore Clara wigs and ribbons in their hair à la rhinoceros. Clara was the most famous young lady in Europe!
King Louis invited her to stay for five months in his private zoo at his palace of Versailles.
When rhinos live in captivity they sometimes rub off their horns.  It's a mystery who has her horn now, perhaps Douwe kept it for himself. 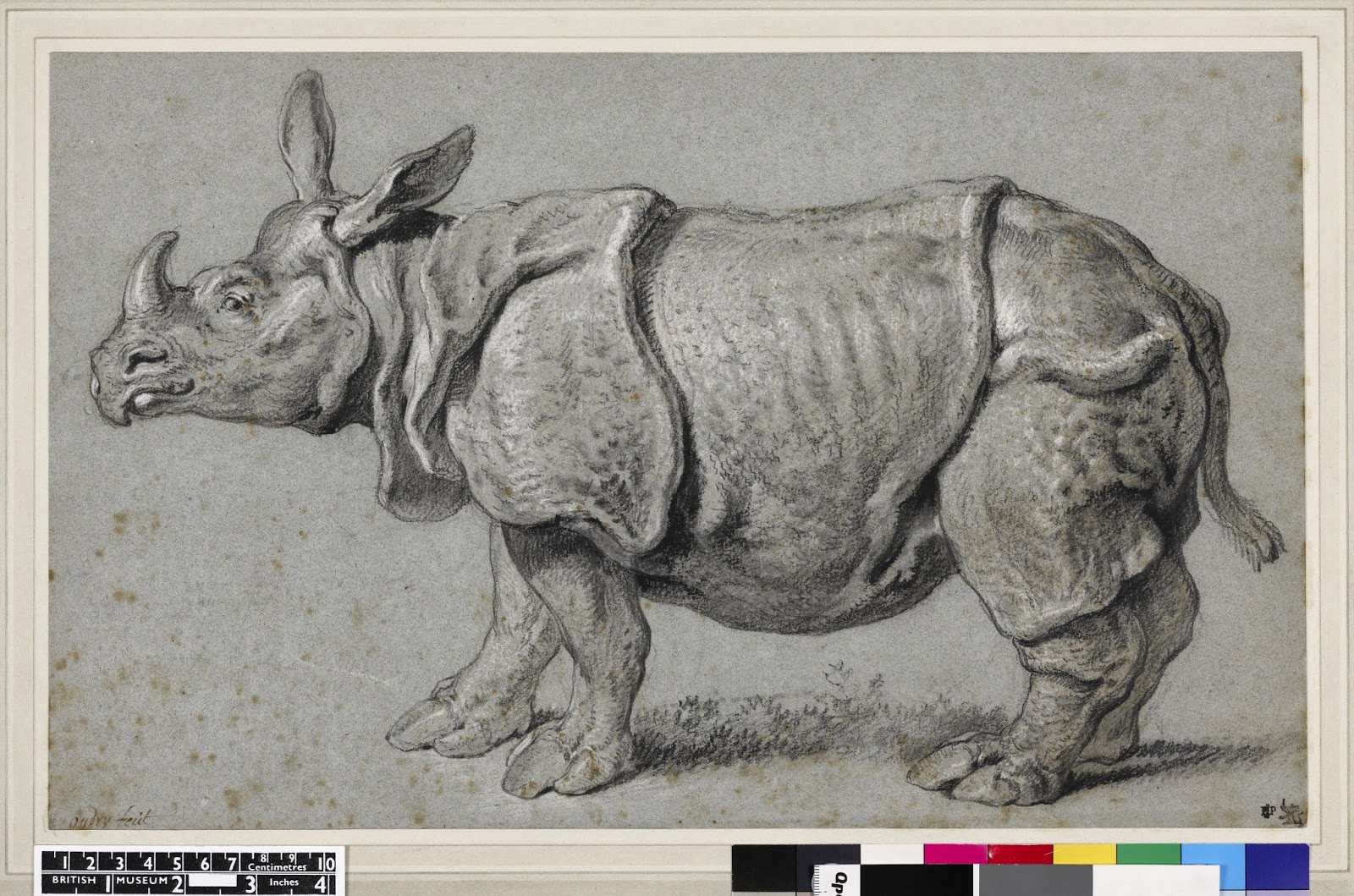 Oudry made the drawing of Clara at the fair in Paris.
In the studio:
He has 4 pieces of fabrics sewn together vertically to make the canvas.
He paints the background: the first layer deep red, then beige.
He outlines Clara’s ample form in thin oil paint.
He builds layers of paint and glazing.
At the end he puts finishing touches and paints those wisps of hair around the ears!

CLARA AND YOU
Do you love Clara’s portrait?
Rhinos can't see very well but their hearing is excellent. She is looking at you and listening to you. What do you want to whisper in her ear?
Does she look intelligent?
Do you want to pet her and feel her skin?
Look at her face in the drawing and the finished painting.   What differences do you see in her face?

Would you like to have a pet rhino?  Perhaps you could draw Clara instead … Everyone would love it!