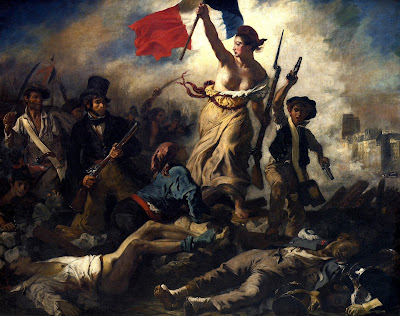 EUGÈNE DELACROIX (1798-1863)
JULY 28, LIBERTY LEADING THE PEOPLE
Signed and dated lower right: Eug. Delacroix 1830
Oil on canvas
260 x 325 cm
Paris, Musée du Louvre
BARRICADE
Can you hear the explosions and the war cries of the people?
Eugène Delacroix’s Liberty Leading the People is a powerful symbol of Freedom and of the Triumph of the French Republic!
In July 1830 Parisians had taken to the streets when the King suspended the freedom of the press and decreed other restrictive measures.
Delacroix saw the events, felt the emotions and put it all on a huge canvas.
How long do you think it too the artist to complete the work, days, months or years? The answer is below!
LADY LIBERTY
Since the Roman Goddess Libertas, a woman personifies Liberty.
Does she look weak or strong in this picture?
Is she a lady who dines with kings and queens or a muscly workingwoman with hairy armpits?  Is she wearing a fashionable French dress or a simple tunic?
Is she worried that her tunic slipped?
In one hand she is holding the tricolored French flag.  Do you remember the symbols of the flag?
Liberté(freedom: blue), égalité (equality: white), fraternité (brotherhood: red).
On her head is a “liberty cap” that was worn by freed slaves in Roman times.
SYMBOLS OF LIBERTY
Describe what Liberty means!
How would you draw a picture of Liberty?
Can you name a famous symbol of Liberty in the United States?  Do you think the French sculptor of the Statue of Liberty had seen this painting at the Louvre before he made the famous sculpture fifty years after the painting?
How is the Statue of Liberty different to this painting?
REVOLUTION
France saw three Revolutions in less than sixty years.  In 1848 France finally became a Republic.
In Delacroix’s huge canvas, Liberty steps triumphant over the bodies of the fallen soldiers of the monarchy.
Everyone is on the street; factory workers, a bourgeois in top hat, students and street urchins.  They are all fighting the monarchist soldiers.  Can you spot Notre Dame in the background?
Is the boy on the right who is waving two pistols about your age? Victor Hugo probably based Gavroche in Les Misérables on this boy.
The elegant man with a top hat on the left may be the artist himself.
DELACROIX
The picture is not only a symbol of Liberty, but a revolution in art.  The great Romantic artist painted a real life event that he saw with his own eyes and transformed it into a powerful image, honoring France.
What are the colors in the picture?
He made many sketches and it took him three months to complete the work!
FUN FACT
Delacroix and Liberty were on the 100 Franc banknote until the Euro was introduced in 1999. 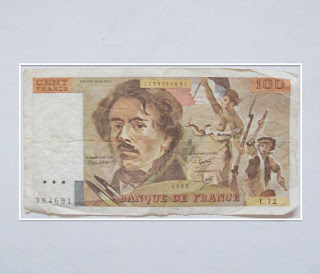 Delacroix was the quintessential Parisian. Two years after painting Liberty he traveled to North Africa.  The trip left a profound mark on him and he painted many beautiful Orientalist images thereafter.
PARIS
Paris is one of the most beautiful cities in the world.  No revolution, war or cowardly attack will ever break the spirit of the French people.  Parisians are steadfast and will not be trampled on. Vive la France!