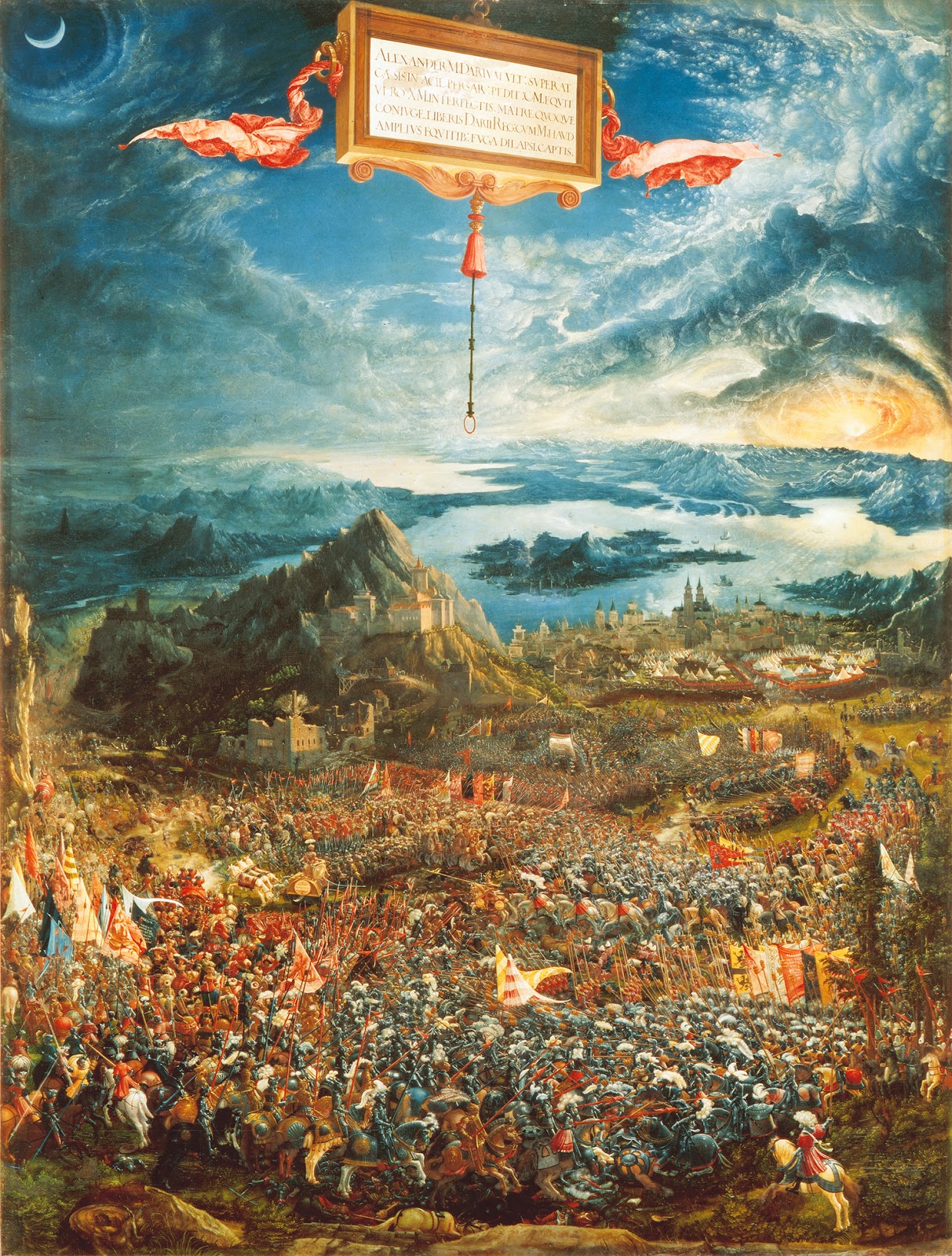 FANTASY MOVIE
or PAINTING?
Does this picture remind you of a fantasy movie?
It seems hard to believe that it was painted almost 500 years ago.
ART DETECTIVES
Find the Persian King Darius in his chariot of three white horses and Alexander the Great, in hot pursuit.
THE BATTLE
The year is 333 BCE; the place is present day Turkey.
Listen to the ear splitting noises of battle cries and thousands of horses charging.
Alexander’s cavalry and infantrymen are in full body armor and plumed helmets.
The Persian king Darius’ troops wear red uniforms and exotic turbans.  They don’t use saddles and are riding their horses bareback.
The weapons are bow and arrow, spears and lances.
There are women in this picture. They look like fancy German ladies going to a party wearing feathers on their hats.  They are riding their horses sidesaddle.  Can you find them?
Altdorfer invented this; there were no female soldiers at Issus.
Identify the different expressions on the faces of the knights!  Some seem terrified, anxious, confident or calm.
Whose armies are larger, Alexander or Darius?
Alexander’s troops are lined up in perfect formation.
Darius’ men are being pushed into darkness.   The sun is shining upon Alexander’s soldiers.
You will now be able to tell who won.
AFTER THE BATTLE
Ride up to the tents of the bivouac at the outskirts of the city! You may find refreshments there.
Then move up the ramparts, past the fortress and climb the tower of the castle.  From there you’ll get a good view of Alexander’s future empire:
The island of Cyprus lies in the center of the Mediterranean Sea.  Look beyond for Egypt’s River Nile pouring into the sea.
Hint: The Delta of the Nile has seven arms.
The Sinai Peninsula connects Africa with Southwest Asia.
The Tower of Babel in the shadow on the left is looking rather small!
Altdorfer’s earth ends with the Red Sea.  At the horizon you will even see the curvature of the globe.
ALTDORFER’S WORLD
Does Altdorfer get the events and the geography right?
No, he takes many “artistic liberties”.
Accuracy is not his point.  He wants to convey to us the magnitude of the event.
With the victory at Issus Alexander’s empire became the largest of the ancient world. It encompassed Persia, Egypt, Greece and Babylon.
SYMBOLS
The sun symbolizes the West (Alexander) and the sickle moon stands for the Near East (Darius).
THE SKY
The dramatic sky takes up almost a third of the picture.
The clouds burst open to make space for a tablet that describes the scene:
Alexander the Great defeating the last Darius, after 100,000 infantry and more than 10,000 cavalrymen had been killed amongst the ranks of the Persians. Whilst King Darius was able to flee with no more than 1,000 horsemen, his mother, wife, and children were taken prisoner.
This tablet is so much prettier than your average museum label!  It looks as though you can move it around by pulling on the cord.
FUN FACTS
The battle took place 800 years before Altdorfer painted it.
Alexander was only 23 years old when he won at Issus.
He always rode alongside his men in the front ranks.
He never lost a battle.
Napoleon I was a great admirer of Alexander the Great.
Napoleon’s armies invaded Bavaria and they took the painting to the Louvre in Paris. After Napoleon crowned himself Emperor, he removed it from the museum and supposedly hung it in his bathroom.
The painting was then returned to Munich where you can see it today.
FOR FANS OF THE HOBBIT and
THE LORD OF THE RINGS
Both Tolkien (the author) and Jackson (the movie director) MUST have seen this painting!
If you let your imagination wander, you will see areas in the painting that will remind you of:
Mirkwood
The Tower of Orthanc
The Eye of Sauron
Anduin Sea
The City of Dale with Laketown
The Lonely Mountain and Misty Mountain
Helm’s Deep Fortress
White City
Dol Guldur
ALTDORFER
He was a Northern Renaissance painter and one the founders of Western Landscape Art.

Posted by Puppa Nottebohm at 7:38 PM No comments: