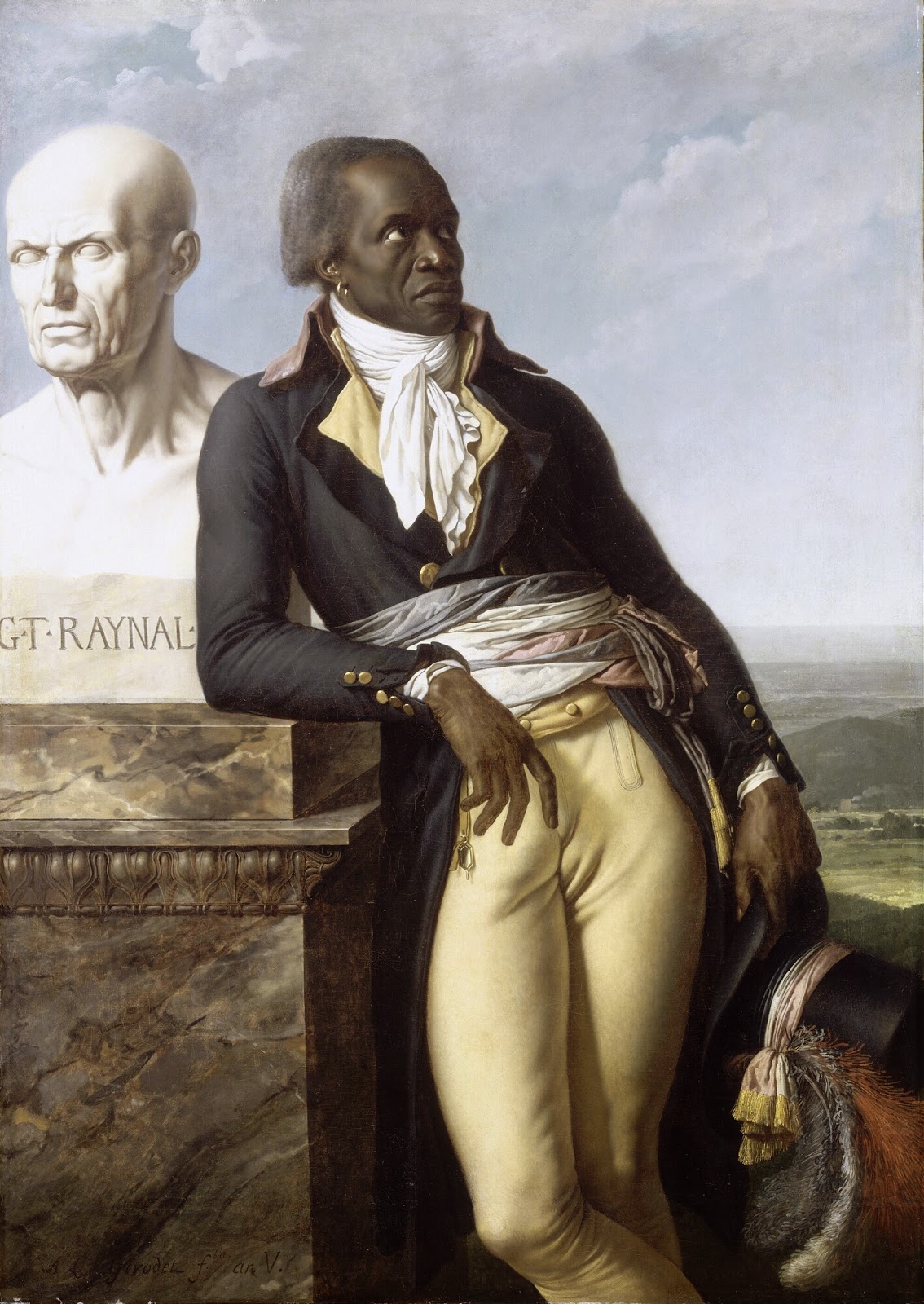 ANNE-LOUIS GIRODET-TRIOSON (French, 1767-1824)
JEAN-BAPTISTE BELLEY
Signed and dated lower left:  A L Girodet f.cit an V.
Oil on canvas
159,5x 112,8 cm
An is French for year and the Roman numeral V stands for the 5th year in the French revolutionary calendar. It is the year 1796 in our Gregorian calendar.
Château de Versailles
MONSIEUR BELLEY
Do you think Monsieur Belley has had a hard life or an easy life?
Is he young or middle-aged?
Is he proud or modest, foolish or wise?
Can he be easily bullied?
Has he done manual labor? Look at the veins in his hands and the marble of the pedestal!
Is he done fighting or must he continue?
IMAGINE
Imagine being born about 270 years ago in Senegal, West Africa.  You are two years old when you are being sold as a slave to Saint-Domingue, present day Haiti.  You arrive in the French colony in the Caribbean, far away from Senegal.  You are one of 500,000 slaves who speak many different African languages. You cannot always understand each other.
Dawn to dusk you toil away in the sweltering heat.  You harvest coffee and sugar cane.  This puts coffee and sweets on the dining tables of Europe.
LIBERTY
You save up your earnings to buy your freedom.
You become an infantry officer and fight in a revolution on the island.  You then travel to Paris and represent Saint-Domingue in France.  Do you think people always treated you with respect?
You are the elected deputy from Saint-Domingue.   Your name is Jean-Baptiste Belley and you are at long last a free citizen of France.
EQUALITY
Belley is leaning on a pedestal with a white marble bust. Raynal had written in favor of the abolition of slavery.  Even though Raynal’s head is much bigger than Belley’s, they are on the same level. Are they equals?
FRATERNITY
The Revolutionary Wars are raging in Europe. A young artist Anne-Louis Girodet (he is a man, despite his first name) has been asked to paint the achievements of the Revolution. Does Girodet paint Belley in his studio or on top of the hill?  Does the landscape look French or Caribbean?  Spot some smoke coming from a burning building!  This may remind us of the revolution Belley fought on the island.
We are looking up at Belley who is gazing at the sky.  Do you feel like tapping his muscly arm so he turns around and looks at you?  Why is he wearing a shiny gold earring?   In Roman times a freed slave who advanced to the rank of knight was allowed to wear a gold ring and run for public office.
The tricolored silk sash is tied around the waist of his uniform. The uniform shows that you represent the people.  This is the first painting of an African-born man as a powerful western ruler.  Do you know the three colors of the French flag?
“Liberty-Equality-Fraternity” is the motto of Haiti and of France!
NAPOLEON
In 1802 Napoleon reinstates slavery. Together with Napoleon’s brother-in-law, Belley returns to Saint-Domingue in 1802.  There he is arrested and brought back to France where dies in prison three years later. In 1848 France once again abolishes slavery, a crime against humanity.
Posted by Puppa Nottebohm at 9:45 AM 1 comment: 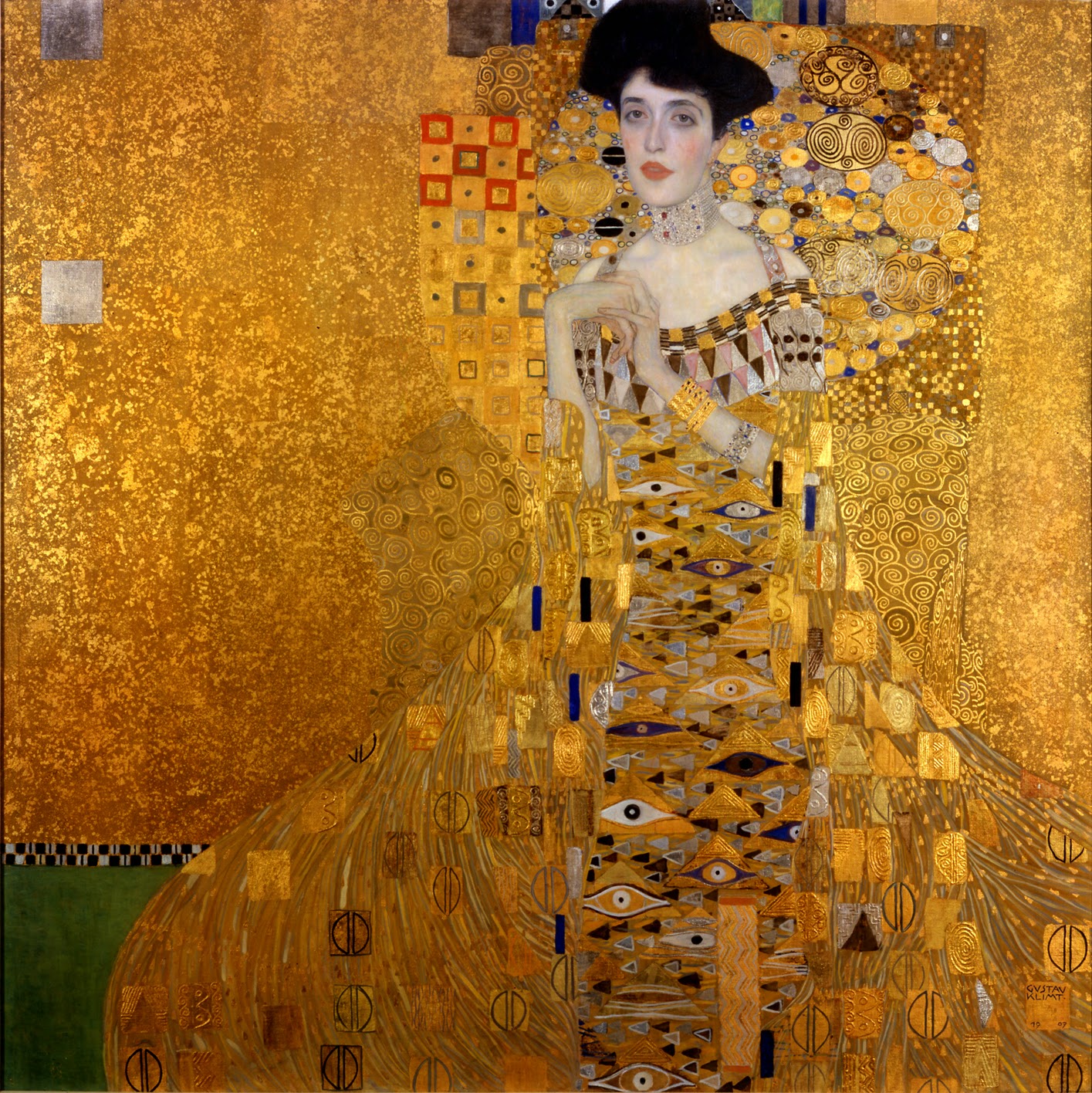 BE DAZZLED
Enter the shimmering aura of Adele Bloch-Bauer.
Would you like to be painted like a modern Byzantine icon, encrusted in gold?
Would your face appear transparent, your hands delicate and your eyes made to look like two large almonds?
Can you name some of the precious stones and metals in the picture?
Even the green floor on the left seems to be made of pure emerald.
Is Adele sitting in a chair or standing?
Find the contours of the big wing chair.
Symbols and patterns make up the background, chair and dress.
Klimt admired Egyptian art where eyes are the symbol of protection from evil.
Can you count the eyes on her dress?
Behind her chair is another pair of eyes; whose eyes might they be?
On the flowing cape you will find her gold encrusted initials: A and B!
GLAMOUR
A hundred years ago Adele was one of the most glamorous women in cosmopolitan Vienna.  She persuaded her husband to hire Klimt to paint her portrait. It took Gustav Klimt three years to finish the picture.
Now Adele is the most glamorous woman in New York.  Like pure gold, her beauty never tarnished.
THE LONG ROAD TO NEW YORK
In 1938 the Nazis stole Ferdinand Bloch-Bauer’s house in Vienna, the art collection, his castle near Prague and his sugar factory.  They didn’t like the Klimts and sold them to an Austrian museum.   The portrait of Adele stayed there until recently.  The Austrian government believed the museum owned it.  This was not true.  It belonged to Adele’s niece and heir Maria Altmann, who had fled to Los Angeles, California.  68 years later with the help of an Austrian journalist and an American lawyer, 90-year old Maria won her case.  In 2006 her property was returned to her.
THE JEWEL OF NEW YORK
Maria Altmann decided to sell the picture.  Adele’s portrait is now the centerpiece of a precious jewel box of a museum, the Neue Galerie, New York.  You have to be 12 years old to visit Adele but in the meantime you can console yourself at the museum café with the best apple strudel and hot chocolate this side of the Atlantic.
SILENCE IS GOLDEN
Klimt didn’t like to mince words.  He painted instead.  He portrayed many of the beautiful ladies in Vienna.
He made many pencil drawings to prepare for the painting.
The artist draws his design with adhesive on the canvas. He then gently brushes the gold and silver leaf on the adhesive.   The rest dusts off and the gold or silver design remains.
GOLD
Why has gold always been so important to humans?
It has to be mined.
It does not tarnish.
It is soft.  This means you can engrave it and mold it.
Gustav Klimt’s father was a gold engraver.
How many expressions and fairy tales do you know that involve the word gold?
THE MOVIE
The story is now a movie: “Woman in Gold”.

Posted by Puppa Nottebohm at 9:45 AM No comments: