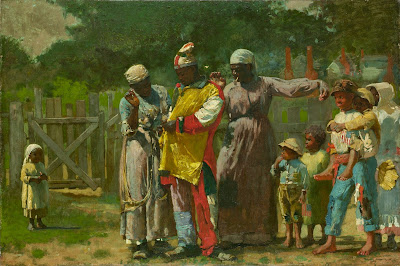 WINSLOW HOMER (American, 1836-1910)
DRESSING FOR THE CARNIVAL, 1877
Signed lower right: WINSLOW HOMER N.A./1877
Oil on canvas
50,8 x 76,2 cm
New York, The Metropolitan Museum of Art
INDEPENDENCE DAY
It’s a gorgeous Independence Day, time to get ready for the parade!   On this 4th of July, 1877 temperatures in Virginia may climb to the 90’s.  What time of the day is it? People are getting ready early in the morning while it’s still cool.
COSTUME
Will you make your own costume or does someone have to sew you into your outfit?  Would you like dress as a Harlequin?  What is a Harlequin anyway; a sort of clown?  What are the colors of the Harlequin’s costume?
His costume is usually made of red, blue and yellow patches. The Harlequin is the funny character from the 16th century Italian Commedia del’ Arte, (Comedy of Art), a vagabond troupe that traveled from village to village to entertain people with funny stories.  If you want to be the Harlequin your role will be to play tricks on people, especially your master.
PARADE
One kid is prepared for the heat and is carrying a straw fan.  Did the kids buy that fan or make it themselves?
The dazzling light is throwing patches of highlights on the group.  What does the Harlequin have in his mouth?  Will the woman who is smoking the pipe catch the butterfly?  The woman on the left is sewing a button on the Harlequin’s costume.  What is the little girl on the left holding?  Do you think she is standing by herself because she wants to be the first to go to the party?
The kids are not wearing shoes, even though there may be snakes in the grass.  Are their clothes new or are they also made of patches and rags?
In 1877 African Americans have only been free from slavery for twelve years and they are very poor.
HOLIDAY
For the Carnival, people dress up in costumes and party.
Junkanoo was a festival that was celebrated during times of slavery.
The 4th of July is the day Americans celebrate Independence from Great Britain.
How many flags can you spot?
Do you think this picture is a mix of all three celebrations?  Will everyone have a great time?
IN THE OPEN AIR
En plein air is French for “in the open air”.  Do you think Homer painted this picture en plein air with his easel propped up in the fenced-in garden?
HOMER
During the Civil War Homer worked for a magazine as an illustrator.  With the help of Homer’s pictures people could find out what was going on in the war from the magazine.  After the war ended and slavery was abolished Homer returned to Virginia to see how people lived.  He originally called this picture:  Sketch-4th of July in Virginia.
Homer had been to Paris in 1867.  He wanted to develop his own way of painting but might have seen the work of Édouard Manet (p..) and other French artists.
Many think that Homer is the greatest American artist of the Nineteenth Century.  In addition to oil paintings he made some stunningly beautiful watercolors.


Posted by Puppa Nottebohm at 9:57 AM