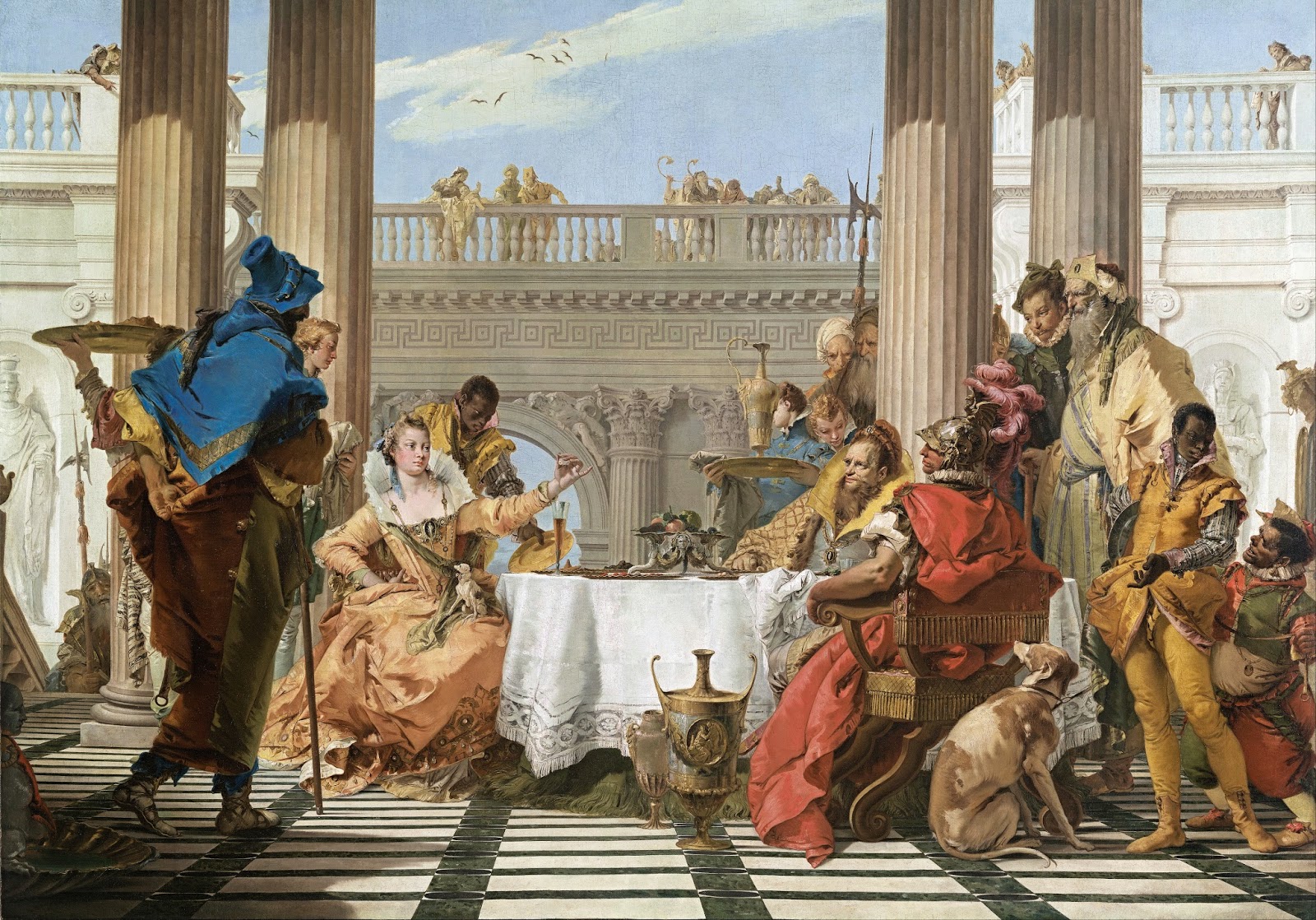 Giovanni Battista Tiepolo (Venetian, 1696-1770)
The Banquet of Cleopatra, 1743-4
Oil on canvas, 250.3 x 357.0 cm
National Gallery of Victoria, Melbourne, Australia
Fenton Bequest, 1933 (103-4)
THE STORY
The kingdom of Egypt was nearing its end. Queen Cleopatra was ruling Egypt alongside the Roman general Mark Antony.  They got married and spent too much time and money on parties and other pleasures.
Mark Antony was known for his lavish taste in food and wine.  Cleopatra bet that she could throw an even fancier banquet than Mark Antony.  For the occasion Cleopatra wore earrings with the largest, most precious pearls in the world.  At first the meal was simple.  Mark Antony laughed at her and thought he had won the bet.  Then came desert.   She took off one earring and dropped the pearl in a glass of vinegar.  The pearl dissolved and Cleopatra drank it.  Lucius Plancus seated next to Mark Antony at the table was the referee.  He declared Mark Antony the loser.
(From Pliny the Elder's Natural History, AD77-79)
Rome declared war on Mark Antony and Cleopatra. Rome won the war and Egypt became part of the Roman Empire.

For closer viewing copy and paste this link:
http://upload.wikimedia.org/wikipedia/commons/5/5e/Giambattista_Tiepolo_-_The_Banquet_of_Cleopatra_-_Google_Art_Project.jpg

THE PAINTING
It's huge: 2.5 x 3.75 meters.
Which moment of the story did Tiepolo paint?
Do you know anyone who'd swallow a precious pearl over a silly bet?
Are you surprised that it was the end of Egypt?
Is the scene set in Egypt or in Venice? Hint: look at the architecture and the dresses.
What could the servants be whispering to each other?
On the balustrade people are pointing fingers and playing music.
Look for people behind the pillars.
Can you see Mark Antony's face?
What is their body language telling us?

TIEPOLO
The Venetian Giovanni Battista Tiepolo was a super star. His pictures are like theater sets.  Like Mark Antony and Cleopatra, Venetians in the 18th century were big spenders. Together with his son, Giandomenico, he painted glorious ceilings in castles.  He painted more of the story of Mark Antony and Cleopatra in the Palazzo Labia in Venice (closed to the public).  The most dazzling ceiling is in Würzburg, Germany, Apollo and the Continents, 1750-3:
http://www.residenz-wuerzburg.de/englisch/residenz/treppe08.htm

THE JOURNEY
Our painting made an interesting journey.  It belonged to Augustus III of Saxony, King of Poland and then to the Tzars of Russia.  It was sold by the Soviets to the museum in Melbourne in 1932. After 200 years of travel I suspect it has found it's final home.

Posted by Puppa Nottebohm at 1:01 PM